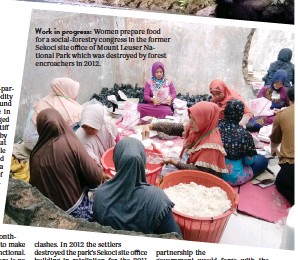 What comes to mind when you see the lush lowland rainforest of Mount Leuser National Park from the pebble-strewn banks of its natural border, the tranquil, clear Batang Serangan River in Tangkahan, an internationally famous elephant ecotourism site in Langkat, North Sumatra?

“Beautiful,” reminisced environmentalist and former student activist Syukur Al-Fajar when he first went there in 1999 with his fellow activist, the late Syaiful Bahri.

This typical tourist comment, made at the height of illegal logging, belied the deforestation going on inside that Syukur said was “invisible from the outside”.

Even today, tourists riding tame elephants along the trail where water buffaloes used to pull timber from inside the forest may not notice the traces thereof or be aware that local farmers still consider wild elephants as pests — not part of the region’s valuable biodiversity.

More than 4,100 kilometers east of Tangkahan, felling that took place inside the forest that belongs to the native Yamban clan in Ahyeri, deep in the interior of Akudiomi in Cendrawasih Bay, Papua, too, went unseen from the outside, albeit for a different reason.

They cut down the trees birdsof-paradise call home so that their brothers who got paid from escorting foreign bird-watchers, but shared none or too little of the proceeds with them, lost their jobs, according to head of Cendrawasih Bay National Park’s Sub-region One, Manuel Mirino.

They saw the birds as a problem and demanded fairness in the equal sharing of the tourism pie, Manuel said. Otherwise, “neither you nor I shall have it,” he quoted them as saying.

One of the clan leaders, Agus Yamban, too, reportedly cuts down trees not because of brotherhood envy but for a living. “There is a middleman who comes to him to collect the timber and sends them to Nabire,” said his ex-employer, Kali Lemon Diving Resort operator Bram Maruanaya.

As the felling took place within their own communal, ancestral territory, local authorities could only urge them not to do so. “We only have five officers to patrol the area and not all of them can be always on site doing monitoring,” Manuel said.

Preserved dead birds-of-paradise were another commodity for sale that authorities found in Oheye Market in Nabire in 2016. The seller, a middle-aged Papuan woman, put up stiff resistance when arrested by the authorities, arguing that she offered the birds for sale to make ends meet, recalled Donald Ferdinandus, data analyst with the local office of the Natural Resources Conservation Agency.

“Throughout 2017, we conducted patrols four times and found no one selling the birds,” Donald said. This, however, means nothing because “routine monthly patrolling” is just a term to make the government look functional. “There is no patrolling if there is no money,” said Donald.

Apparently, Tangkahan’s loggers and Papua’s indigenous people living on Leuser’s and Cendrawasih Bay’s peripheries see forests for their money-making potential and biodiversity as a meaningless, abstract intellectual idea they are not interested in unless it makes a profit.

At Besitang, 102.7 km northwest of Tangkahan, deforestation was, by contrast, out in the open, as thousands of forest encroachers grew crops and even built settlements within Leuser.

Three decades of conflict with the authorities reared its ugly head in 2011 when a joint operation by the military, police and forestry authorities to evict the settlers led to bloody clashes. In 2012 the settlers destroyed the park’s Sekoci site office building in retaliation for the 2011 incident.

The fact that the government took no action against so few may indicate uncertainty about the status of the area and a lack of clear-cut policies. Incomplete boundary delineation and the granting of forest concessions in areas intersecting or within parts of Leuser to a palm oil manufacturer complicated the matter further.

To resolve this issue, director general of Natural Resources and Ecosystems Conservation Wiratno, in a break with the government’s heavyhanded tradition, publicly apologized to 12 groups of ex-encroachers at a gathering in Besitang, for treating them as enemies. He even invited them to kneel down together with him to apologize to God and the earth. Wiratno also asked the right questions previous governments had failed to consider: does poverty drive them to encroach on the forest? Are there wealthy exploiters behind them?

“Poor people don’t have to encroach on the forest. We will provide them with land where they can grow crops,” Wiratno said, outlining the partnership the government would forge with the former settlers for an initial period of 10 years.

and (dogfruit). Wiratno’s approach, which reflects President Joko “Jokowi” Widodo’s people-centered leadership, will probably connect the dots broken by the government’s tunnel vision in enforcing the law against people who may know nothing about the law.

Rather than leading to arguments that resolve nothing, leading questions such as “aren’t forests there to be utilized for humans’ greatest benefit?” and “which is more important, humans’ livelihood or the forests’ flora and fauna?” should lead to the striking of a balance between the two seemingly conflicting interests that could actually be synergized, as in Tangkahan’s case.